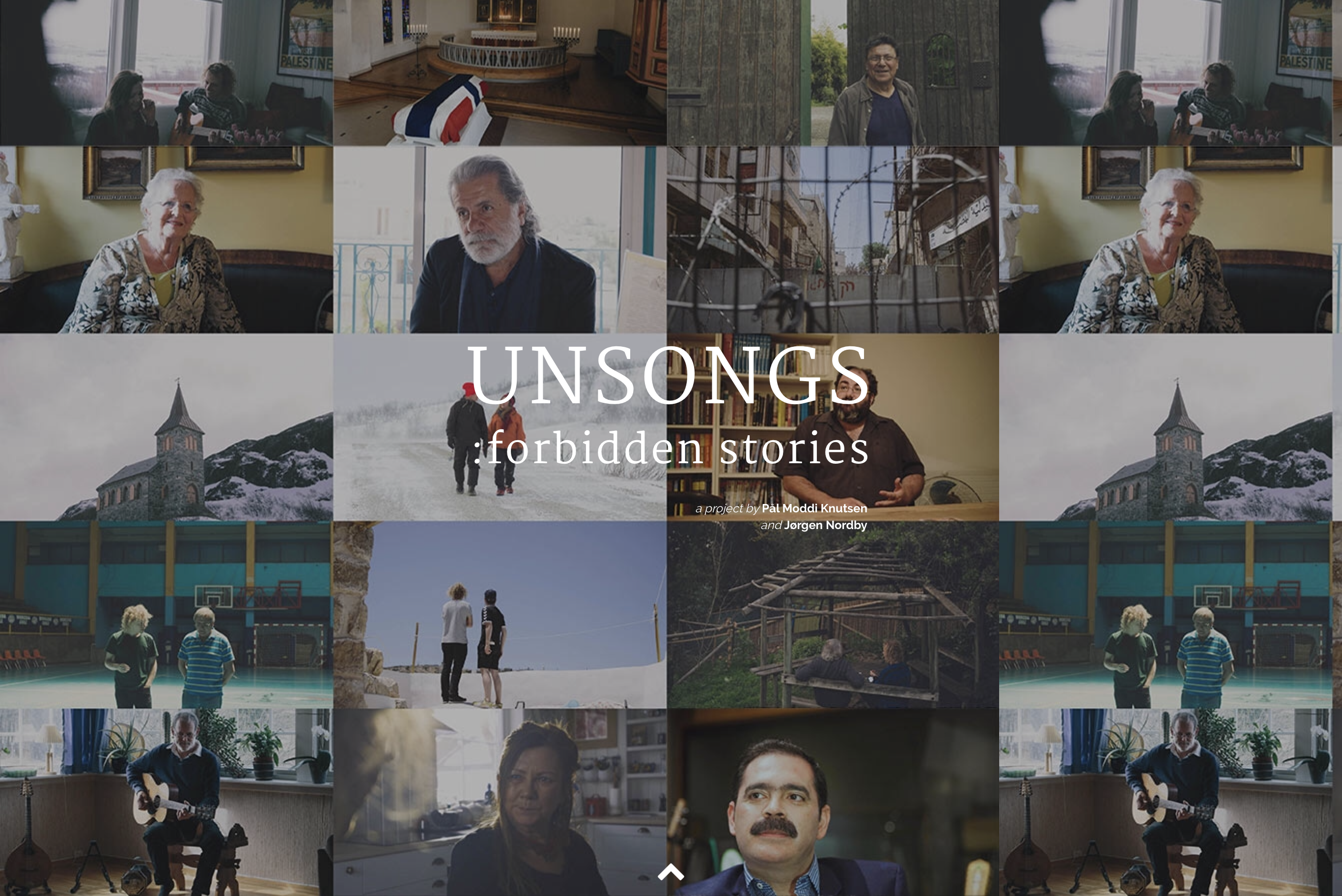 Cover songs, were they ever a novelty? Every band and artist I know has dabbled in doing an acoustic version of a classic song by another artist. Covering a quiet song in a loud way or a loud song in a quiet manner… We’ve seen it al these days. Hardly ever anything interesting happens in the world of ‘covering’ these days. Except Moddi happened. A Norwegian singer/songwriter with a collection of forbidden songs from all around the world.

Of course, I don’t actually mind a good cover. Tribute albums to artists can be very interesting (though sometimes a bit too forced). And as a band trying to gain an audience, there are worse ways to go than to release a covers EP of classics. The Well Pennies did it, for example, and their “a bit too sweet at times” cover of All My Loving (The Beatles) at least did help me get into some of their original work. The same goes for Yo La Tengo’s Friday I’m in Love (The Cure). Although neither of these artists are now ranking anywhere near the top of my most-played playlist, at least they’re now on my radar.

Covers can also be a great way to see your favourite artists in a new way. Although Laura Marling’s versatility has never been in doubt for me, hearing her cover Bruce Springsteen was a nice surprise. And Lisa Hannigan’s cover of Oh You Pretty Things (David Bowie) is both interesting and beautiful. (There have also been many covers by – for me – familiar faces that don’t do as much for me, including Iron & Wine’s Time After Time – which is nice but doesn’t add anything to the original). Ideally, these covers not only do something interesting to the song, but also add colour to the artist performing it. Or at the very least influence the image in your head of said artist.

Now, I wouldn’t exactly call Moddi a familiar face. I knew exactly one song before I discovered his cover project. But still, one song can be enough to get an image of an artist. House By The Sea is a romantic, slightly sentimental song which you either love or hate, I find. This song, and a quick browse through his songs available on streaming services, did confirm his reputation in my mind of a slightly romantic, slightly sentimental songwriter. I’d put him in the drawer along with Stu Larsen, I guess. Imagine my surprise when I he popped up in a new music playlist singing:

A Matter of Habit (Moddi version)

It turns out that this song, A matter of Habit is part of a twelve song cover album by Moddi with a track list selected with one criterium: the songs all have to be banned in some country – or at least have been banned in recent history. If not originally written in the English language, they have been translated to English and can now reach a bigger audience. And thus, Ishtar Ashdot’s – a rock star from Israel – song based on his conversations with soldiers fighting against Palestines, suddenly can reach a worldwide audience. Questioning the point of such conflict and looking for the humanity, was not what the Israeli government at the time was wanting from a hit song. And thus, the song was banned on the radio. I’d say by now the song has become once more very relevant, with more confrontations in the region happening.

As a way in to the album, which is cleverly called Uncover, there are worse places to start than with A Matter of Habit. If anything, this album reminds us that war, conflict and freedom of speech and thought aren’t as normal as you’d hope. One of the highlights of the collection is Punk Prayer. The original was made by Pussy Riot. The version here is the bare essence of the song, more prayer than punk, but still very much a complaint against Putin’s reign and the state of Russia.

The echoing piano in the beginning sounds haunting and dark. The song complaints against the church, its ties with Russian government. And there’s also messages in there about feminism, gay culture and more. Summarising all this leaves you with lyrics such as:

Freedom’s ghost has left these lands
Help us if you can.

Before getting more explicit:

Holy Mary, drive Putin away.
Drive away this darkness from your halls.

It’s a genuine moving cover Moddi has released here. And while the original Punk Prayer gets banned from YouTube on a regular basis, at least this English translation is available on streaming services for your listening pleasure.

Of course, by calling out Russia and the Middle East, you’re talking about two of the major conflicts in this world these days. Thankfully there are some older songs here too. Like Army Dreamers, originally by Kate Bush:

Shortly after the first Gulf war in the early nineties, a UK magazine published a list of nearly 67 songs that had been considered “inappropriate for airplay” on BBC during the combats in the Gulf. One of these songs was released over ten years before the war, by the then 22-year-old Kate Bush: Army Dreamers. Although the BBC never confirmed the song was banned, but it’s easy to see the song might be a bit demoralising for the general public in war times. It’s a mother’s perspective on his teenage son going off to war, and the chorus laments the chances said son misses out on:

What he could do? Should have been a father
But he never made it to his twenties

Great fun, indeed. But harsh truths need to be heard too. Most of the Unsongs on this record, you probably have never heard of, unless you’re from said country. Victor Jara’s Plegaria a un Labrador is addressing the Chilean working class:

You can steer the course of the river.
You, with the seed, sow the flight of your soul.

The English translation in Moddi’s version helps to better understand the song and its meaning, but the fact remains that the song sounds much more poignant in its original form, released in 1969, three years before the Chilean state coup, where lots of prominent left-wing figures were taken to makeshift concentration camps around the country. Víctor Jara had dedicated his entire career to political activism through a life on stage, as well as behind it. And thus he became one of the more prominent victims of this crackdown on the left wing culture. The original song is exactly what you imagine: a singer/songwriter making a political statement on jangly guitar, fierce and full of passion. And while Moddi’s version does get some of that passion as it continues towards its climax, it can’t fully replace it. Moddi’s project therefore works best when he’s not simply replicating the voice of the original author, but working as a song historian shining a light on some forgotten corner of culture and activism.

Maybe unsurprisingly, Moddi has dabbled in activism before this project and is now even more willing to embrace it in his own compositions. Releasing his album Like in 1968 in September 2019, he says he has “learned a little from singing the songs of Víctor Jara, Pussy Riot and Kate Bush. About music, and about hope.” The first two singles are both demonstrations of his new direction. Little By Little was inspired by a depressing event (some trees being chopped down in Moddi’s favourite forest), but is an exercise in trying to be hopeful in the current world we’re living in. A second song, Kriegspiel is about a Norwegian border inspector charged with attempted espionage against the Russian navy. It is happy, with a choir and a cheery beat:

“Ever since his arrest, Norwegian politicians and government officials have remained silent about the case (…) To them, Frode Berg appears to be an unperson. If I learned anything from the work with Unsongs, then it is that behind every curtain of silence, there is a story that needs to be told.”

While it is hopefully unlikely that Moddi’s Kriegspiel will be banned by the Norwegian government anytime soon, there is more to worry about than just governments banning works. We now also have people discrediting other people’s opinions and silencing other groups. Whether you’re left, right or somewhere in the middle, if you loudly proclaim your way is the best way and do not take in consideration the opinion of others, you might be lacking empathy or compassion. Unsongs might be an antidote in these sometimes desperate times that there are multiple ways to go forward, multiple ways to think. And that in a couple of years you could be wondering whether you were on the right side of the argument all along…