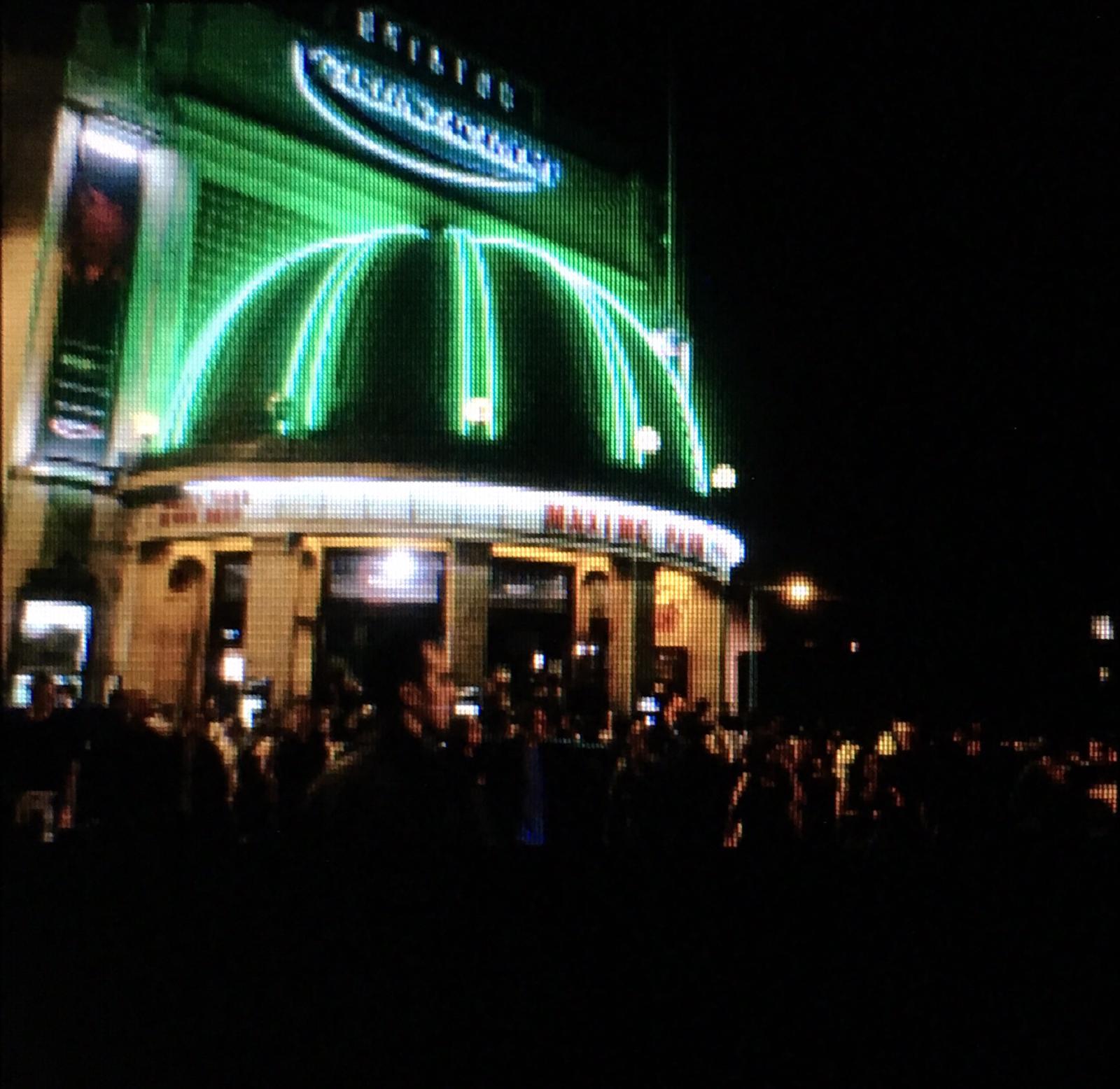 Of course, everything is context and it has been interesting for me to note from personal experience over recent years that digital doom-mongering and calling for regular detoxing are propounded not necessarily by older generations but by those who have grown up with digital life as a constant, even if not necessarily for the entirety of their lives. For those of you to whom this applies, I have the sense (which might be inaccurate and if so I apologise) that it’s not so much a matter of choice as of its simply being there and, maybe therefore, inescapably there, with much of your lives having been played out on it – some of which you’d rather forget and seek re-invention. I on the other hand was 28 when Friends Reunited (who in the UK remembers?) arrived and presaged Facebook – I didn’t join at the time. I was in fact a late-adopter to Facebook, choosing to join at the age of 39, primarily to keep informed on gig dates. This was born out of frustration at artists using a fledgling Twitter only to share their Facebook event page links, rather than sharing the information directly in tweets. And I was in my early 30s when Google became the search engine of choice in the UK (leaving Yahoo behind?).

So, growing up my world was rather different. A world where what you experience and how you are informed in the arc of your life is limited by your physical environment – where you live, who you live with, where you study, how accessible and comprehensive your local library is (if you are so inclined, of course), where you work, who your friends are (and those friendships primarily garnered through physical proximity) and the experts/figures of authority you have physical access to. No other outside influences except maybe television, maybe newspapers, maybe magazines. For me, as a teen the equivalent of free-wheeling discovery on the internet and social media was the afternoon play on BBC Radio 3, giving me access to distinctly alternative worldviews, albeit in perfectly enunciated voices – and setting me off on other discoveries through related topics mentioned in those plays (my own kind of curated algorithm, I guess).

The key is you have a choice, even if in the way you engage doesn’t always feel like one.

I used to turn up to my local record stores looking to see if my favourite artists had released a new album. There was no way other than chancing the shelves at irregular intervals – no website, no internet search (and that kind of trad folk not likely to be featured in music magazines). Sometimes I’d ask the archetypal guy in black behind the tall counter, which was slightly too tall for my short self, with varying degrees of success based on their knowledge of their distributors. While there was a certain romance to the serendipity of discovery in the store, there was also disappointment (and a failed trip) when it didn’t happen (though with passing years I learnt to recognise some kind of 2 year-ish interval between albums pattern). Conversely, I did discover many things I wasn’t looking for, just by looking at album artwork, instrumentation details and writer credits but that was my choice to discover. It was the lack of choice through lack of information for what I was actually looking for – that’s what hit me about this pre-online world once I was living the other side of it. And once you have access to that information, you can’t go back. But I argue that you can still choose the romance if you just stay off looking online for that particular thing. The key is you have a choice, even if in the way you engage doesn’t always feel like one.

Since I’ve already mentioned algorithms, how do I feel about the “suggestions based on what you have viewed/interacted with”? To me, they’re simply a computerised iteration of, for example, looking at groupings of CDs according to genre. It’s not surveillance (I’m not talking about data misuse), it’s just a different expression of the kind of reasoning a friend might use to set you up with someone: you have these interests and experiences, maybe you’d get on – and of course there’s often commercial incentive involved but you don’t have to act on it. I’m not saying the suggestions can’t lead to some laughable/negative correlations – and in some cases even trigger – but it’s not personal, even if it might feel that way. It’s interpreted data. At least that’s how I choose to think of it.

And sometimes it actually works. I’ve found answers to things I hadn’t thought to ask but actually had wanted to know for a long time from, for example, suggested videos based on my YouTube viewing; and one of the most impactful articles I have read about nutrition was through a suggested page on Facebook, which was actually near the beginning of my “transformation” journey and I still refer to that article nearly 3 years on. It turns out it’s one of that page’s most popular articles but it feels like it was meant for me right at that moment, reinforced by the fact that I’ve only seen that page re-post it once since (the other day, in fact). Since then, another suggested page has resulted in an erstwhile sceptical family member benefitting from sessions with a postural alignment specialist, whom neither of us would have known about had it not been for my Facebook feed.

I’ve since tried a Google search for that specialist: the result did come up but only after three searches and it lacked the immediacy of seeing a Facebook post with an impactful summary and helpful video from the specialist himself. I’ve since seen this specialist featured in various press and it might well have been a case of not seeing before what I didn’t know but I had noticed over the past year or so that the Facebook posts were becoming less frequent. I looked up the page for the purposes of this article, to see whether recent posts had been missed off my feed and, actually, the page seems to have gone (maybe not for good but the search result turns up either related results or a broken link diagnosis). The website, however, is alive and well. I probably sound somewhat deluded or evangelical but it’s moments like these which make me feel that those algorithms have worked for me and at the most opportune times. And that’s what keeps me believing. (And just to clarify, I hadn’t previously searched for an alignment specialist before the page was suggested but I had read theoretical articles online relating to body alignment.)

Now I guess as I’ve mentioned algorithms, I feel I should state that I’m certainly not qualified to discuss data manipulation and its vast ramifications in any detail (a huge subject all on its own) and I’m certainly not saying it’s right. However, having emerged from a world where, for example, it was perfectly typical to receive unsolicited catalogues in the post, selling products some nameless data-collating agencies had deemed I might want, based on knowing my socio-economic status I hadn’t given them permission to know (other than the fact I was employed, had a salary and used a bank account), I’m just saying it’s not new. It’s not something the internet and social media invented, even if the reach and consequences are far more significant now (and hence the necessary “measures” I mentioned earlier).

But to return to my record store example, to me it’s a much more enabling world online (and I’m not necessarily talking about consuming, though I do purchase but don’t stream). Thinking about what I see as another gateway of growth for me – gig-going – online access to information is far more democratic than navigating an almost deliberately under the radar world of listings in small print on the newspaper back pages, necessitating you to turf up at some London back-ish street to pick up your tickets from a booking agency because the venue doesn’t hold the tickets. I remember how much easier and accessible it first felt to find listings online and have the tickets sent to you in the post or, later, on your phone (though no doubt some mourned the death of cool in that). It certainly enabled me to go to more gigs than I otherwise would’ve done, probably including the one which led me to be on stage 7 years ago. And, as I said, that did make all the difference. Where I’m at now is intrinsically linked to that moment 7 years ago and all the gig-going before that and I’m the happier for it. When I think of how it could have been had I not engaged online, that makes more of an impact on me than the thought of agencies knowing my purchasing habits or putting two and two together to make five about my relationship status and assuming I’m looking for a fertility clinic (for example).

I admit my music-related examples are somewhat (and excuse the use of phrase) first world problems but the reason I list them is because for me they represent two transformative paths which sent me to experiences which, given my background and “profile”, I would otherwise not have felt so empowered to pursue and which led me to have longstanding connections with people I would otherwise not have met. Queueing round the block at Brixton Academy in 2003, in a sea of early 20s white youth, I rather felt an oddity created by the internet. But though it felt awkward at first, it was ultimately liberating. I also knew that, although I felt I didn’t fit what I thought was the profile, had I not felt that I was nonetheless validly a fan with a right to be there as much as the next person, I would not have been in that queue – and that feeling was fostered solely by being a part of the fan forum. And, again, that is what keeps me believing.